Is There a Bubble in the US Stock Market?

​Key points:
There are a number of models that try to tell whether the stock market is overpriced or not. The most popular models assume that Price-Earnings, Price-Dividends, or CAPE ratios will revert to a "normal" level. The main difficulty in using these models is that one knows what "normal" was in the past, but nobody knows what "normal" is now (the relevant discussion can be found here in the AQR paper entitled "Challenges of Incorporating Tactical Views").

If we define a bubble as a period of explosive behavior in a time-series that is stationary over a long run, then detecting bubbles is easier than evaluating whether the market is overpriced or not. Take, as example, the CAPE. It is a mean-reverting stationary process over a long run. However, its long-run mean exhibits an upward trend which complicates a lot finding its current "normal" level. In contrast, a period of explosive behavior in the CAPE can be detected regardless whether the CAPE is high or low.

We use the methodology by Phillips, Shi, and Yu (2015) to detect bubbles (the interested reader can download their paper here). The input data is the Shiller CAPE ratio over the period from January 1880 to January 2019. The outcome of the algorithm is presented in Figure 1. In brief, we have evidence of explosive behavior in the CAPE when the black line is located above the red line (which shows the location of the 95% critical value). We highlight the bubble periods by shaded gray areas. Note that the algorithm does not distinguish between positive and negative bubbles. That is, a period of explosive behavior is detected regardless of whether it is a period of explosive growth or decline. Figure 2 plots the CAPE ratio. Shaded gray areas highlight the bubble periods. 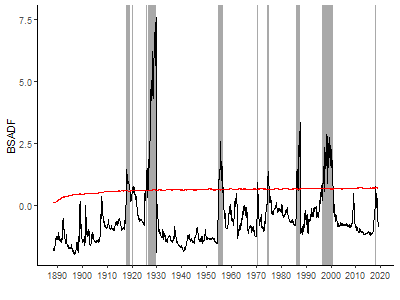 Figure 1. Outcome of the bubble detection algorithm. Shaded areas highlight the bubble periods. Click on the figure to increase the size. 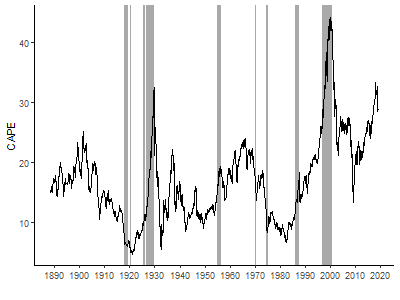 Figure 2. CAPE ratio. Shaded areas highlight the bubble periods. Click on the figure to increase the size.
The list of the positive bubbles is as follows: Figure 1 suggests that the last bubble was inflating during the whole 2017. After the market correction that took place in February 2018, the last bubble has been deflating. Interestingly, on January 31, 2018 Alan Greenspan warned that “We have a stock market bubble”. It looks like investors immediately freaked out, and their fear led to the market correction and bubble deflation.
Valeriy Zakamulin, 27 January 2019.
Powered by